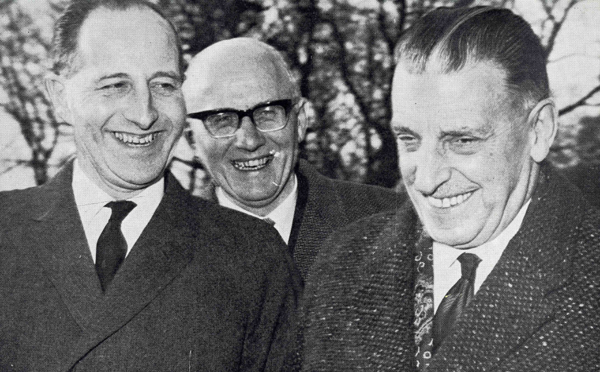 This biography comes from the CAIN website here –
Terence O’Neill

Terence O’Neill was born in County Antrim in 1914. During the Second World War O’Neill became a captain in the Irish Guards. In 1946 he was elected as the Unionist MP for the Stormont constituency of Bannside. O’Neill became a member of the Northern Ireland cabinet in 1955 with his appointment as Minister of Home Affairs (November 1955 – September 1956). This was followed by a spell as Minister of Finance (September 1956 – March 1963) and when Lord Brookeborough retired as Prime Minister in 1963, O’Neill was to emerge as his successor (March 1963 – April 1969).

From the outset O’Neill set the new administration a series of ambitious goals. To begin with he was determined to attract new sources of investment in order to counteract the problems that had been created by the decline of traditional industries such as shipbuilding and linen. In addition he was keen to improve Northern Ireland’s social and economic infrastructure by moving to encompass the new concepts of central government planning and organisation. His belief in the need for reform also involved seeking to develop better community relations within Northern Ireland. This was attempted by seeking to build closer ties with the authorities in Dublin and slowly moving to address the sense of alienation felt by many within the minority Catholic community towards the political system in Northern Ireland.

On all these fronts O’Neill was to achieve mixed results. Whilst there was to be some success in improving economic and social conditions, major difficulties were to develop elsewhere. In particular moves such as his meeting in January 1965 with Séan Lemass, then Irish Taoiseach, raised concerns amongst many within the unionist community as to O’Neill’s commitment to the constitutional status quo. On the other hand for Northern nationalists the apparent failure of his government to meet their calls for reform gave way to disillusionment and then to the rise of the civil rights campaign. Faced with these twin problems by the end of the 1960s O’Neill felt his room for manoeuvre was becoming increasingly limited as relations between the two communities became further strained. In an attempt to strengthen his own position he called an election for February 1969 but in the end this gamble failed and by April 1969 as the situation continued to deteriorate he resigned as Prime Minister.